Scenic drive offers look into the past

This is my favorite time to make the drive between Cuernavaca and Mexico City.  I am always transported in both time and place to 16th century Flanders and Pieter Breugel's famous painting, The Harvesters. 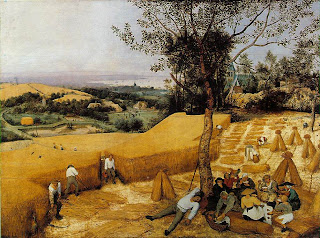 At the top of the Chichinautzin ridge one forgets the tropics of the valleys on either side.  With a cold climate and frequent rain, there are no lush swimming pools and no bougainvillea. Sheep outnumber people. Instead of shorts and t-shirts, residents are more frequently seen in warm jackets.

Though the entire area looks like one big farm it is cooperatively-cultivated ejido land and for the ejido farmer, the oats harvest is now in full swing.  Just as the oats were planted and fertilized by hand they will be harvested by hand. Then the are left in the field to dry in conical stacks without separating the grain from the stalk. Though oats, not wheat, the golden stacks of the 21st century are no different from those of Bruegel’s 16th century landscape.

There are no fences between farms but each farmer knows exactly where the boundaries are and harvests only his or her crop.  It is only during the harvest that one can see how many holdings there are.  On some farms stalks are still standing, in others they are in the process of being cut. In still others, they are already stacked in conical piles.  The only difference in the harvesting methods used in Bruegel’s time and that of modern farmers on this ridge is that in a few weeks stationary baling machines will be brought to the fields and bales will be hand-loaded onto trucks.  Harvesting remains a very labor-intensive process.

The ejido farm is a uniquely Mexican type of land holding system. Although the government of Mexico parceled out fields to landless peasant farmers, giving them the right to use it is as their own, the nation retains the title.  An ejidatario cannot use his land for any purpose other than farming, nor can it be rented or sold.  If it isn't cultivated or farmed appropriately it reverts back to the community and is given to one who will.  Lázaro Cardenas, perhaps Mexico’s most beloved president as well as a general in the Revolution, believed the tremendous number of landless peasants was the spark that led to the violent social upheaval. He embraced Zapata’s ideas for land reform and the ejido is a legal concept that was his answer to the question "How do we give land to landless peasants and make sure they don’t turn around, sell it, becoming landless peasants again?"  Finding an answer to the question could provide insurance against a future revolution.  The ejido, modeled on prehispanic land use, without ownership, seemed to be an answer.
This is a grand time of year to travel over the ridge.  From either direction on a clear day, both on the ascent and descent of the highway, one can see snow-capped Popocatepetl and Iztaccihuatl.  Though much of the ridge is part of the Federal District and well-protected, when one enters the Valley of Mexico, one of the most densely populated areas of the world, trees and forests give way to miles upon miles of human habitation.

Along this storied Cuernavaca-Mexico City route are also the paths of Zapata and the Revolutionary Army, dozens of inactive volcanoes, even burros walking along modern superhighways.  For the acute observer, there is always that moment when the centuries blur.  With a little imagination you can enter Bruegel’s 16th century European world.  Or, even Jose Maria Velasco’s 19th century landscape portrayals of Mexico as an amalgam of modernity and tropical naturalism.  Bruegel’s painting even depicts a large distant lake.  If the lakes of the Valley of Mexico had not been filled in would The Harvesters even more closely resemble today’s Chichinautzin ridge? 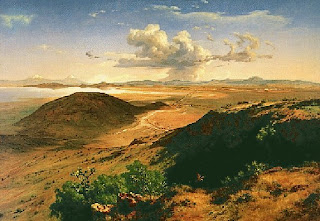 Take your choice.  At great expense and dislocation you can fly five hours to New York City and see the original Bruegel painting or you could drive to the Chichinautzin ridge and be in the painting itself.  In the lower right of the painting are picnickers and nappers.  I suggest you take a picnic and a blanket and share a torta.
Posted by Charlie Goff at 5:12 PM