On a well-beaten path in Puente de Ixtla

If you've driven to Taxco from Mexico City you've passed the turnoff to Puente de Ixtla, in southern Morelos.  Perhaps, you, like me, have wondered what is Ixtla?  And, is there really a bridge there?  Last week I went in search of the bridge and found it -- another destination gem in Morelos. 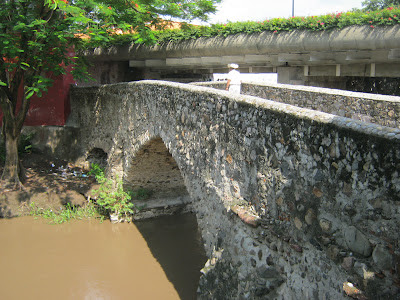 With a railing-height stone-wall on each side, the old bridge is wide enough for a horse drawn carriage or a cart pulled by a team of oxen.  As I walked across I imagined traversing the bridge 4 to 500 years ago as part of the Camino Real from Mexico City to Acapulco.  It is certainly one of the very few places where the Camino survives in its original design.  Even the roadway portion of the bridge is stone.

In addition to local traffic it is a bridge that was certainly crossed by viceroys on their way to Acapulco for the annual fair upon the arrival of the "Nao de China" -- the fleet from Manila.  Alexander von Humbolt must have crossed it on his famous trip when he referred to that Royal Highway as the Road to Asia.  He noted it was in Acapulco where one boarded a ship to the Philippines.  During the viceroyalty period most everything that went back and forth between New Spain and the Philippines undoubtedly crossed this old stone bridge -- furniture, silk gowns, ivory, porcelain, silver coins minted in Mexico, cochineal dye, books, government documents.  During the war for Independence the Insurgent army used it.  Zapata headquartered his army in Puente de Ixtla for a portion of the Revolution.  Before the automobile age, the Puente was crossed by those travelers who gathered for Mass at dawn in the Franciscan hermitage on the outskirts of Cuernavaca then set out as a group on their way to Acapulco.  The bridge at Ixtla was certainly a landmark for them; one by which to gauge how far they had traveled, how far they had yet to go.

The new concrete bridge is barely wide enough for two lanes of vehicular traffic with no space for a sidewalk.  Pedestrians are directed to the old bridge, now in its fifth century of constant use!
Though only half an hour south of Cuernavaca, Puente de Ixtla has a rural feel to it.  Turn off the highway at the first exit to Puente de Ixtla and you're in a bustling town rarely visited by tourists.  Many of the seemingly endless shops are selling agricultural products.  The older part of town is close to the river; you'll know you're there when the street angles down.  Turn left at the church and that street will take you right into the market.  As you poke along, live chickens will be for sale within arm's reach of your car window.  Two right turns get you back to the main street within sight of the bridges -- old and new.  Puente de Ixtla's charm is not its architecture; it is its ancient bridge, its history which hopefully you will imagine as you block out the contemporary.

Parking is available across the street from the storefront office labeled SRE (Secretariat of Foreign Relations).  Yes, Mexican passports can be requested in Puente de Ixtla!  It is a federally sanctioned municipal passport office and one of only three in Morelos.  In Puente de Ixtla, unlike the busy passport office in Cuernavaca, for only a hundred-peso surcharge, Mexicans file the paperwork for passport without an appointment, it's ready four days later.  A photo studio, copy shop, and bank where necessary fees can be paid are all within two blocks of the SRE office.  At the SRE office you are only two doors uphill from the bridge.

The second half of the town's name refers to obsidian.  Obsidian is volcanic lava cooled so quickly it bypassed crystallization and became glass instead of rock.  It was the source of ancient Mesoamerica's sharpest tools.

Teotihuacan, in the Valley of Mexico, was Mesoamerica's premier producer of obsidian tools.  In fact, its financial success was based on it.  Because of its abundance of obsidian Puente de Ixtla very likely fell under Teotihuacan's control during the time that Teotihuacan was central Mexico's religious, political, and financial powerhouse.  When other cities or towns competed in the obsidian trade Teotihuacan's income was affected; it would send its warriors out to conquer the offending place and demand all obsidian production flow through Teotihuacan.  Teotihuacan fit the classic definition of an empire, controlling distant colonies without an interest in controlling the territory between the metropolis and its colonies.  What it was interested in was trade and its most important product was obsidian.

It was a wonderful day exploring a seemingly isolated yet unexpectedly busy town.  I highly recommend a detour when you next visit Taxco.
Posted by Charlie Goff at 1:26 PM