Ducks are back in Borda Gardens

The weather we’ve been having is fit for ducks. And I’m glad to be able to tell you that the ducks are back and thriving in the rowing lake in Cuernavaca’s Borda Gardens. Six years ago they were banished by the director of Morelos’ Culture Institute because she said “the ducks and the fish get things dirty.” The current administration has welcomed them back. Private citizens are supplying the ducks. 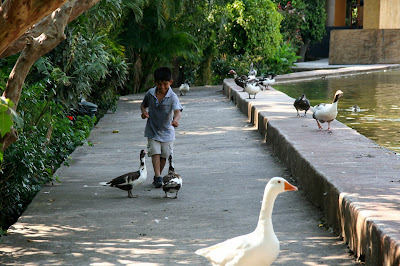 This is wonderful news because it just wasn’t the same without the ducks. The Borda Gardens is one of Cuernavaca’s hidden gems — it’s right across the street from the Cathedral. I consider it a sanctuary in the center of busy downtown. No one pesters you inside the gardens. A small admission fee keeps the vendors out. You can sit on the grass, a bench, or at a garden table and read a book. You can even have a picnic on a boat in the rowing lake.


It’s the ongoing legacy of an immigrant to Mexico, José de la Borda (1699-1778) and his son Manuel. José was born in France to a Spanish mother and French father and was baptized as Joseph de La Borde. When he was 16 his mother did to him what many Spanish mothers still do to their teenage boys — she sent him to America “to become a man.” At that time Spanish mothers purchased passage for their sons on a ship from Cádiz to Veracruz. Today they buy their sons a one-way ticket on a flight from Madrid to Mexico City. They arrive on this side of the ocean with a little bit of money and a long list of relatives who have already made the trip. Many of them have done very well. Borda was one of them.

Upon arrival in this Spanish viceroyalty Joseph hispanicized his name and signed in at Veracruz as José de la Borda. From there he went directly to Taxco where he caught up with his brother Francisco. Both brothers had a knack for finding silver. They did so well that they married two daughters of the mayor of Taxco. The Verdugo sisters became Mrs. Borda and Mrs. Borda.

It was after Francisco’s death that José discovered Taxco’s richest vein of silver. He had mule trains carry the silver from Taxco to the mint in Mexico City. Cuernavaca was a good resting point. The cargo would be unloaded at Borda’s Cuernavaca estate to give the overseers, guards, muleteers, and the mules themselves a couple of days rest before continuing to Mexico City.

In appreciation for the tremendous wealth the silver bestowed on him, José de la Borda built the Santa Prisca church facing Taxco’s zocalo. It’s the only church of its size built in the 18th century Mexico for which there was enough money to finish when construction began.

It was José’s son Manuel who transformed the mule train depot in Cuernavaca into a botanical garden. He had a landscape architect lay it out with a French design of crisscrossing walkways with fountains where they intersected. He extended Cuernavaca’s aqueduct to end in the rowing lake which doubled as a water tank at the highest part of the property. Water flowed by force of gravity through the planter beds. I imagine the lake was filled with ducks then too. 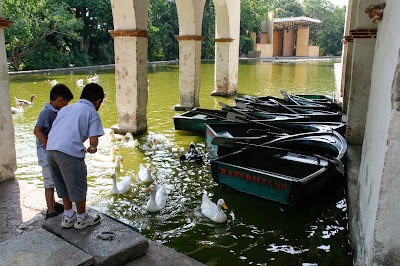 In the 1860s the Borda family felt it appropriate, perhaps taking into account their French ancestry, to make the property available to French-imposed Emperor Maximilian and Empress Carlotta. Maximilian made plans to use the Borda home and gardens as his summer palace but his empire didn’t last long enough to do that more than once.

In the 1970s, while restoration work to the Borda Gardens was underway, I read a newspaper article about an Austrian woman who traveled to Mexico on a diplomatic passport.

When she returned to Austria a short while later she was decorated by the Austrian government for returning a collection of Emperor Maximilian’s jewelry and medals. If the story is true, the Austrian government had known the location of the stash for more than a hundred years but had not had access to the gardens without risk of being caught.

Last weekend as I thought of those ducks in the rowing lake as the only ones enjoying the endless rain I decided to see if I could confirm my recollection of that story. I went to see long-time Borda Garden employee Heberto González who has authored a book about the gardens. I remembered him and he remembered me as a frequent visitor with students in tow and always with food for the ducks.

You see the ducks learned to recognize me and would gather around whenever I stood on the edge of the rowing lake. He’d heard the story about the Austrian woman too but couldn’t confirm its accuracy.

That’s okay. The story adds to the charm of this wonderful spot in the heart of Cuernavaca. And I’m happy because the ducks are back.
Posted by Charlie Goff at 4:46 AM