Madonna. Sting. Bono. We know them by one name only. They’re the superstars who’ve achieved such recognition they no longer need more of an introduction. For 50 years Mexico has had “Pixie,” the famously talented fashion-setting singer, actress, and clothing designer.

Pixie was born in Singapore while her father served in the British Colonial Medical Service. Named Angela Jean Hopkin she was called Pixie from birth. The first 12 years of her life she lived in Singapore, Hong Kong, South Africa, and Ireland. After World War II and her father’s release from a Japanese Changi war prison in Singapore, the family returned to England.

Pixie finished school and studied theater in London’s Central School of Art. After working in repertory theater for a few years, Pixie was chosen to go to Dallas to participate in the opening of the only theater designed by Frank Lloyd Wright. There she met a captivating Mexican phenomena, and her legendary life in Mexico began. 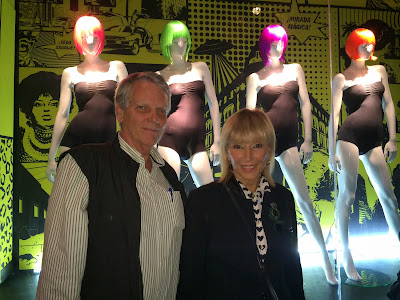 Pixie arrived in Mexico in 1963 on the arm of her Mexican fiancée, soon to be husband, film and theater director Juan José Gurrola (1935-2007). Coincidentally Gurrola too was known by only one name.

Pixie co-starred in the award-winning film Tajimara (1965). Written by Juan García Ponce and directed by Gurrola, Tajimara has a vignette scene featuring many Mexican actors, writers and artists appearing as themselves. Talking about the movie Pixie laughed and said, “every time one of these artists die the movie reappears on TV.”

Though Gurrola was a major part of Pixie’s early Mexico years, she also starred in both Mexican and U.S. movies under other directors — Mariana (1967), Candy Man (1968), and a singing role in Patsy Mi Amor (1969). At the time Pixie also sang professionally. She was the first to sing Beatles songs in Mexico and was the star of the show called “2+8 en Pop.”

Pixie fondly recalls the 1960s as the “Gurrola years,” a great period for Mexico’s creative arts and intellectualism. “Everyone knew everyone else. We worked together, played together, and had a wonderful time. It was pre-Tlalteloco and Mexico seemed the best place in the world to be.”

By 1969 Pixie had divorced Gurrola and was partnered with theater entrepreneur Alfredo Elías Calles, grandson of Plutarco Elías Calles. Alfredo cast Pixie in the avant-garde Mexican production of “Hair,” a tribal love-rock musical. Because of nudity and its satirical references to religion and morality, “Hair” was closed by the government the day after it opened. Most of the performers were arrested. “Through notoriety we became an instant family and have remained so,” Pixie said.

In a not-so-successful attempt to become low-profile, Alfredo and Pixie started a wig and eyelash company in the 1970’s called “Pixie.” It was an immediate success with 50 stores opened throughout Mexico. Pixie was invited to be on the TV program Siempre en Domingo and for four years shared time with Raul Velasco. New wigs and lashes were introduced every Sunday in lavish, campy, often comic musical numbers featuring Pixie. She was a sensation and by the end of those years recognized throughout Mexico as simply “Pixie.”

Pixie also designed clothes for these shows. “People started calling to ask where they could buy them. Thus ‘Pixie Fashion,’ a line of hip fashion clothes, was born,” she says. “Soon I had a number of stores in Mexico City. The Polanco mother-store, designed by British architect of BIBA fame Whitmore Thomas, was especially forward — a fashion destination.” The Pixie line was sold at Bergdorf Goodman, Neiman Marcus, and Nordstroms as well as various British stores.

Pixie began working with the upscale Mexican department store chain Palacio de Hierro in 2002 and is currently a sub-director. “I love my work. I work with young, talented and excited artists. I remain passionate about fashion and hope to instill that spirit in them.”

Palacio de Hierro has turned its downtown Mexico City store into a museum of its own history celebrating of its 125th anniversary. One of the windows honors the “Pixie Years.” I toured the whole exhibition last Thursday with Digs collaborator Carol Hopkins. It is a fascinating review of Mexico over the last 125 years as lived by the “rich and famous” — only interrupted in 1914 when a fire conveniently closed the store for the remainder of the revolutionary decade.

Pixie’s 50th year in Mexico is being celebrated far and wide. In October she was featured in the fashion magazine Elle, popular  Quien, Women’s Wear Daily and enjoyed appearances in various other media.

“Mexico has been very good to me. It’s given me an amazing life, my beautiful daughter Gabriela Gurrola, and work I continue to love. I wake up each day excited about what new fashion trend I may discover,” she says. Despite all the years in Mexico, her heart is still Irish and she returns each vacation to her family home in Kinsale.

Women’s Wear Daily’s article about Pixie was titled “Pixie Dust.” May Pixie continue to spread that magic Pixie dust on Mexico.
Posted by Charlie Goff at 4:16 AM