Bringing together the dead

The Days of the Dead are quickly approaching. Marigolds have already been planted in the flowerbeds lining Paseo de la Reforma. Truckloads of the bright yellow flowers are making their way from farmers’ fields to towns and cities all over Mexico They will be used to decorate tombs as well as home altars.

This year there is a new destination for these fragrant flowers, the Cinerario Comunitario (Community Cinerarium) in Cuernavaca.

The Cinerario Comunitario was inaugurated just last month. It is located inside the chapel of Our Lady of Sorrows in Cuernavaca’s Catholic Cathedral compound. It is the first in Mexico.

Unlike a columbarium, where cremated remains are each in a separate niche or urn, in the community cinerarium ashes are poured into a huge vault where they mix with the ashes of others. There is no charge for depositing ashes and the cinerarium is open to people of all faiths.

Cuernavaca’s cinerarium is the brainchild of Catholic lay missionary Raymond Plankey, a native of Massachusetts and a longtime resident of Cuernavaca. It required the backing and approval of the municipal and state authorities as well as the clergy.

Father Ángel Sánchez said at the inauguration, “It may seem strange to mix the ashes of the dead but there have been many cases of this documented in Church history.” He told us how English Cardinal John Henry Newman (1801-90) was buried with his good friend Father Ambrose St. John.

The cinerarium has benefits at many levels. It takes pressure off overcrowded cemeteries. For the poor, it represents a tremendous financial savings. And, from a theological point of view, as Father José Luis Calvillo said, “It is rich in symbolism about the communion of the church in showing that what little is left of the human being on earth can join with remains of other brothers and sisters, beyond religious beliefs and social positions in a respectful and dignified setting.” 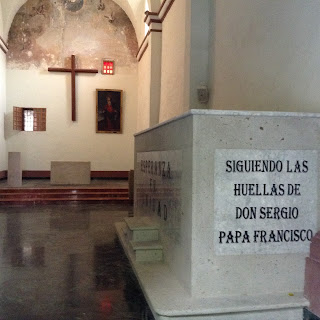 Although Plankey came upon this idea on his own and has mulled over it for three decades, he readily admits googling to find out if community cinerariums exist anywhere else. He found that former Archbishop of Buenos Aires Jorge Bergoglio built several in his archdiocese where cinerariums are an economical option for poor families to bury their dead and still have a place to return to honor their loved ones.

With company like that I doubt there will be any criticism of the mixing of the ashes. But, if there is, I’d refer those critics to ancient Mesoamerican lore, which maintains that our humanity owes its existence to the commingling of bones of the deceased.

Ancient Mesoamericans knew that the gods are dependent on people for their sustenance. When the fourth sun refused to return, the fourth humanity died off and the gods’ existence was in jeopardy.
Once the gods had created a fifth sun, Quetzalcoatl — the feathered serpent — traveled to the realm of the dead at the lowest level of the underworld to find the bones of his father and mother and from them create a new humanity.

The god of death did not willingly give up his acquisitions and was prepared to catch Quetzalcoatl on a technicality. “You are authorized to take the bones, but you were never authorized to touch the bones. If you can take them without touching them you’re welcome to them.”

Quetzalcoatl decided the ends justify the means and stole the bones. His dog identified the two sets of bones he needed and Quetzalcoatl carefully picked them up. The god of death chased him; Quetzalcoatl ran. In darkness he tripped on a rock in the path. Mother’s bones got mixed with father’s bones and some shattered. Hastily Quetzalcoatl gathered them into a bag hanging over his shoulder, making it out to this level of flat earth we live on, just in the nick of time.

Quetzalcoatl sprinkled some of his own blood on the bones bringing them to life and creating the humanity of which we are a part. But because the bones got mixed up a mother never knows if her baby will be a boy or a girl. Because some broke some people are shorter in stature and some are taller.

Nevertheless, rich or poor we can go to the graves of our loved ones, cover them with flowers and for a moment bring them back to memory and to life.

Each year during Days of the Dead I honor John Spencer an English ex-pat, artist, poet, who is buried in Cuernavaca. Decorating his tomb is a festive occasion to which all are invited. If you’re interested in participating please email me.