I invite you to visit a central market in Mexico. Most municipalities have one, and they are delightfully busy places. Activity starts before dawn as trucks arrive with produce, flowers, and fresh meat and continues until after sunset. Think of them as the original big box store where you can find anything and everything.

Despite a first impression of chaos and confusion, in this type of market there is order to the layout. Meat is in one section, fish another, and chicken stalls are all together.  Vegetables are in some aisles, fruits others.  Cheeses have their own section as do móle, pasta, and herbs.  There are areas for haircuts, food stalls, and seasonal items. You need a new machete, you’ll find it.  Any kind of pot or pan, dish or flowerpot--it’s there.

Standardized weights and measures are essential in setting prices in a market of this type. In most cases prices are set per unit of measure and customers are not penalized for buying in small quantities.  If the price is set per kilo, the cost of 250 grams is one quarter of the kilo price.  However, not all vendors have scales on which to weigh their merchandise. 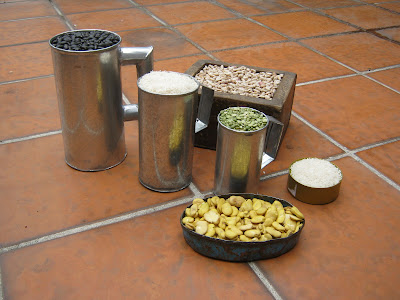 There are a number of other units of measure which are recognized and accepted in Mexican markets.  These allow customers to comparison shop between various stalls.  As far as I have been able to determine they are amazingly uniform throughout the country.

A "cuartillo" is a unit of volume equivalent to two liters.  There are two presentations of this measuring device. One is a cylindrical tin container which looks like a straight-sided pitcher with a handle. The other is a square wooden box.  Both can be used to measure grain or beans.  Only the metal one is used to measure liquids, such as milk or cooking oil.

Half cuartillo pitchers are referred to as "medio cuartillo" and half of that is called a "puño" (a fist).  Though pitchers and boxes are clearly handmade, I've tested their accuracy using water.  Two puños equal a medio cuartillo and two medio cuartillos equal a cuartillo, in both cases filling the larger container right to the brim.

When measuring dry ingredients such as grains and beans there can be a fluctuation in the amount you get depending on how the pitcher is filled.   There’s a way to fill the container that is advantageous to the buyer, and another way that is better for the seller. When buying, set the pitcher on the ground and fill it, shaking and tapping it on the ground a few times in order to get the contents to settle into the container a bit more.   When selling scoop up the grain, brush off the excess on top, and quickly pour it into the customers bag or bucket. I call the first technique "settling" and the second "scooping."

This difference came to light under President Luis Echeverría's administration (1970-76) when the government fixed the price for both buying and selling corn. Most farmers preferred to sell their corn to middle men who paid immediately rather than sell it to Conasupo, the National Company of Popular Subsistence, who took weeks to pay. By alternating between "settling" when buying from farmers and "scooping" when delivering to Conasupo, the middlemen could make an additional profit -- sometimes 10% more.

Two other unusual units of measure found in main markets are tuna fish cans ("un atun") and sardine cans ("una sardina").  Since these items are a standard size and sold all over the country, they are a dependable way to measure small quantities.

In public markets you'll notice that some stalls are much better equipped than others.  Those selling cheese and other dairy products will usually have refrigerated display cases.   I recently asked a vendor whose market stall is right at the boundary between cheese and grains -- he sells both -- if he uses a cuartillo.  He disparagingly answered that only those who sell "en el piso" (on the floor) use cuartillos.  He sells per kilo.  I didn't ask what he meant by "floor" however I did wonder if he was referring to a pile of grain on a tarp, or to those who have their grains and beans in barrels resting on the floor instead of a fancier display counter such as his.  What was clear is that there is pride that goes along with how the merchandise is presented.

Fascinating as it is, shopping in a central market is not to everyone’s taste.  There are no shopping carts, payment is made at each market stall, no credit cards are accepted, space in the aisles is tight, and parking spaces are scarce.  On the other hand, there is little waste.  Youngsters are more than willing to carry your purchases for a tip as you move through the market, prices are excellent, and you can have a grand adventure as you shop.

Email ThisBlogThis!Share to TwitterShare to FacebookShare to Pinterest
Labels: market