A terrific collection of silver, furniture and drawings are on exhibit at the Franz Mayer Museum in Mexico City right now. They are the work of William Spratling, who lived and worked in Taxco Guerrero from 1929 to 1967. Spratling led a fast paced life and he loved Mexico and its people.  As his biographer Joan Mark says, "The land suited him because it mirrored him.  It was harsh, tough, and weighted with secret sorrows."

Spratling's fame rests on Taxco's silver.  Don Guillermo, as he was known in Taxco, introduced new silver designs into the market. He also trained apprentices and valued their input in the manufacturing process.  He put Taxco on the map as a vibrant production center of world-class design. 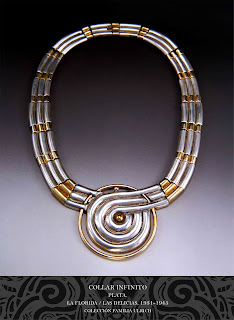 About silver he wrote:  "The true color of silver is white, the same color as extreme heat and extreme cold.  It is also the same color as the first food received by an infant, and it is the color of light.  Its very malleability is an invitation to work with it.  It lends itself to the forming of objects in planes and in three dimensions of great desirability, objects to be done by hand in precious metal."

Helen Escobedo tells us that after sizing up a customer's ability to pay, Spratling would lead his visitor into the appropriate display room in his shop in Taxco.  He served iced champagne in the gold room and tequila in the silver room. A third room was for tourists in general.  In all three rooms the quality was high; what varied was weight, size, and type of metal.  In the exhibit at the Franz Mayer Museum you'll see a great variety of the work that came out of his workshop.  One display is of identical, equally beautiful, tea sets, one in silver the other copper.

You’ll also see Spratling’s signature furniture. His slightly reclined chairs are made of a hardwood frame with a single piece of leather as the back and seat. A low table with a stretched leather top completes the set.

The exhibit also includes some of Spratling's sketches, drawings, and portraits.  You’ll see illustrations from his book "A Small Mexican World," which he originally published under the title "Little Mexico."

What caught me by surprise, in among some personal effects, is a wallet-sized copy of Spratling's honorary doctorate diploma from Auburn University -- tribute to his multi-faceted life and personality.

It was his knowledge of architecture and skill in sketching that brought Spratling to Mexico in 1929 on a commission from Architectural Forum magazine to write and illustrate articles on Colonial architecture. In moving to Mexico he gave up the house he shared with William Faulkner in New Orleans but he had a knack for making friends with the most interesting people around.  In his article "Figures in a Mexican Renaissance" Spratling wrote of his new friends artist Diego Rivera, archeologist Manuel Gamio, and Moises Saenz, defender of the rights of Indigenous peoples. 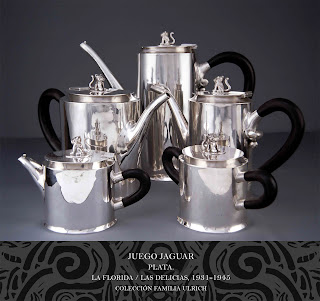 On one occasion he piloted his plane to Alaska where he signed a contract with the territorial government set up a native jewelry production program to supplement the income of the Inuits, similar to what he had set up in Taxco. Shorter trips could be on a whim to Puebla to buy traditional "camote" candy or off to Acapulco for fresh fish.

After crashing his Ercoupe and surviving the night on a 12,000 foot peak, he gave up flying and acquired a Ford Mustang.  It was on a high-speed drive to Mexico City that he met his death in 1967.

"Taxqueños remember August 7, 1967, the day Spratling died, as northern North Americans of at least a similar age remember the death of John F. Kennedy -- they can remember what they were doing when they heard the news," writes Ms. Mark. This newspaper reported at the time that 20,000 people attended his funeral.

Taxqueña Margarita Dominguez said at his funeral: "The people of Taxco are mourning the death of a man who came to settle among us, not just as a friend, but as a brother, who for more than thirty-five years shared our pains, our bitter griefs, our sorrows, and our poverty as well as our pleasures and our deepest joys." 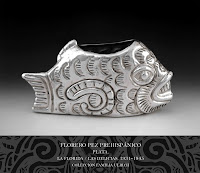 On your next trip to Taxco make a point of visiting the Spratling Museum in an attractive three-story building behind the Santa Prisca Church. It holds mainly archeological pieces that Spratling purchased and collected for their artistic value rather than their archeological or historical value.

I also encourage you to treat yourself to a marvelous visit to the Spratling exhibit, titled "William Spratling, Designer; Legacy in Silver", in the Franz Mayer Museum on Hidalgo Avenue, across the street from Alameda Park in downtown Mexico City. The exhibit is open on Tuesdays-Sundays through February 17, 10:00 a.m. - 5:00 p.m. Parking is available in a building adjacent to the museum. The Bellas Artes metro station is a block away.  Save some time for a meal or coffee and dessert in the Museum's cafeteria set in one of the most beautiful of Mexico's downtown gardens.