The Strength of the Triangle


I first got to know Heberto Castillo through his weekly news analysis articles. Besides being a university professor and a noted politician, Castillo was also a civil engineer.   I always found his articles interesting to read because even though they were of political content he did not resort to political rhetoric or polemic.  Instead, he presented his readers with facts and invited us to have our own calculator in hand as he led us through mathematical calculations. 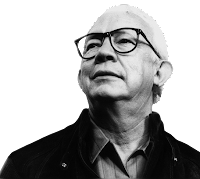 When I started reading him, his most frequent topic was analysis of Mexico's oil policy.  As a reader of Castillo's articles I learned about the cost of production of oil and gas, its characteristics, how and where it could be stored, gas pipelines of various diameters, techniques of welding pipe, how much gas it takes to fill a pipeline, the value added to oil by transforming it into a chemical product and more, all while entering figures into my calculator.

By following his logic and doing the math there was nothing to do upon finishing his articles other than to agree with him.

In the field of civil engineering Castillo is best known for his breakthrough in a design that he named "Tridilosa". It is based on the strength of the equilateral triangle.  Turns out a triangle cannot be deformed into any other shape -- unlike squares and rectangles, for example, which can be deformed into parallelograms.  Tridilosa is based on welding or bolting equilateral triangles together to form pyramids and then welding/bolting pyramids to pyramids.  With that Castillo could span huge areas in buildings, creating floors and ceilings with a horizontal structure that cannot sag.  It also brought with it tremendous savings in weight and expense over the traditional concrete and iron-reinforcing style of construction.  He applied his technology to buildings, bridges, even barges and floating drydocks.  I've read reports of bridges he designed for Nicaragua over which trucks can drive yet they can be lifted and carried by two people -- one at each end. 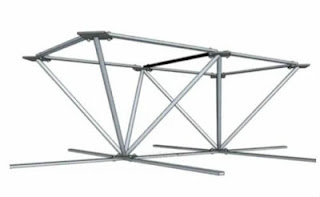 Mexico City's predominance of low buildings makes it an easy city in which to find landmarks to guide us on our way.  On the west side of the city I frequently use the World Trade Center as a reference point.  Blue in color, rectangular in shape on all its sides with a revolving restaurant on top -- it is an easy landmark to pick out in the city's skyline. This is Castillo’s largest building using the tridilosa design. It holds Mexico City's record as the building enclosing the most interior space. Formerly called the Hotel de Mexico, for a number of years it was also Mexico City's tallest building. 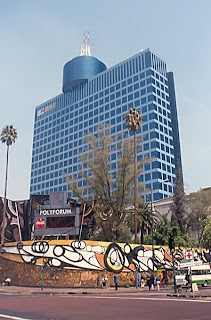 In the political realm Castillo is most remembered as a founding member of the Mexican Workers Party (PMT), which later dropped out of sight when it merged with other parties of the left.  Castillo liked to say "Tridilosa benefited the PMT because I could design a bridge in a morning and, with the fee I charged for it, finance the party for months."
After doing this for a number of years Castillo decided to stop financing the PMT with his honorariums because he realized he was weakening the party by making it dependent on one person as well as giving himself excessive influence over the philosophy and administration of the PMT.

Tridilosa's strength, based on the equilateral triangle, became the example Castillo used to describe his political ideology.  He compared society to an equilateral triangle. Labor, capital, and government are what make a society strong he said, but they only do so if they are of equal strength.  If one part gains dominance over the others, Castillo's philosophy maintained that it either had to be restrained or the others needed to be strengthened.  Castillo saw a need to strengthen the labor portion of that equation in Mexico.

Castillo died in 1997 while serving as senator from Veracruz.  Though he was a strong critic of the government he was nevertheless a very respected one.  The weight of his words far exceeded the size and strength of his party.  The Senate in which he served chose him as the 1997 recipient of the Belisario Dominguez Medal of Honor, its highest award, bestowing it on him posthumously.   In 2004 his remains were moved to the Illustrious Persons Rotunda in the Dolores Cemetery -- the highest honor in Mexico's civil cemeteries.  The very modern design of the green glass monument over his tomb resembles the Mexico World Trade Center in its proportions.  Intentional?