A taste of Paris in Mexico

A new metro station opened in Mexico City last Saturday. It will be a station that even those leery of riding the subway will want to visit. It’s this year’s Days of the Dead altar at the Dolores Olmedo Museum in southern Mexico City, presented hand-in-hand with masterpieces of art on loan from the Musée de l’Orangerie in Paris.

This exhibit came about because relations between France and Mexico have been mended by the current administrations in both countries. In exchange for lending Mexico the paintings from France’s national collection, 75 paintings and drawings by Frida Kahlo and Diego Rivera are on exhibit in the Musée de l’Orangerie.

This convergence will be capped by French President Hollande’s visit in early 2014 — the 50th anniversary of the visit by General Charles de Gaulle. 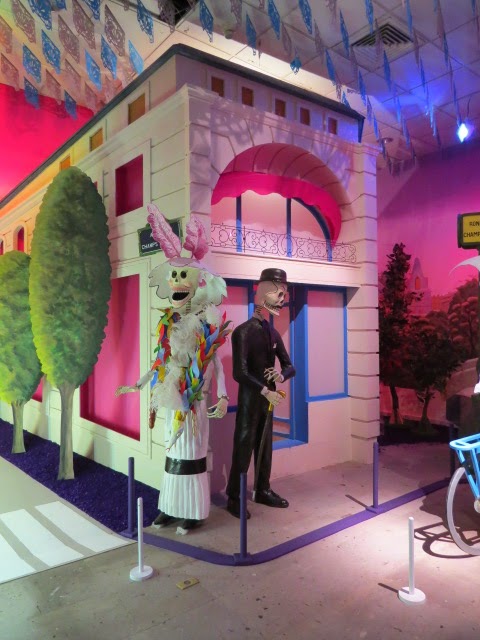 “Masterpieces of the Musée de l’Orangerie” is made up of 30 paintings by 11 impressionist and modernist painters. They will be on exhibit until Jan. 19, 2014. The exhibit features paintings by Paul Cézanne, André Derain, Paul Gauguin, Henri Matisse, Amedeo Modigliani, Claude Monet, Pablo Picasso, Pierre-Auguste Renoir, Henri Rousseau, Chaim Soutine, and Maurice Utrillo.

In recent years Days of the Dead altars at the Olmedo Museum have been dedicated to the art and crafts of different states in Mexico. This year’s extravaganza goes a step further. As a visitor you’ll enter the altar through Paris’ Montmartre metro station. After a few twists and turns you’ll emerge into Paris of the early 20th century, populated by life-sized skeletons going about their daily activities.

Don’t miss La Calaca Catrina — an elegantly dressed female skeleton. It is an emblematic figure in Mexico’s Days of the Dead made popular by Mexican cartoonist and satirist José Guadalupe Posada. Diego Rivera came to know her by purchasing copies of Posada’s broadsheets on his way to class at the San Carlos Academy in Mexico City. Later Rivera incorporated her into in his mural “Dream of Sunday afternoon in Alameda Park.” In it, Rivera as a boy holds her hand while Posada stands the other side of her. In the Parisian scene you’ll see La Calaca Catrina on a street corner accompanied by Posada, now also a skeleton.

Exiting from the “metro station” you’ll be in the Olmedo Museum’s extensive gardens. You’ll see peacocks on each side of the path and dogs of metallic color, the descendants of xolitzcuintle dogs, that stand so still it is hard to distinguish them from the sculptural portrayals of dogs in their pen.

“Masterpieces of the Musée de l’Orangerie” is in the museum’s main building. It begins with Claude Monet’s “Argenteuil” and ends with Maurice Utrillo’s “Notre Dame.” The five galleries between those two are filled with paintings on loan. Museum director Carlos Phillips said “there hasn’t been a foreign art exhibit in Mexico with as many paintings of this quality in the last 50 years.” 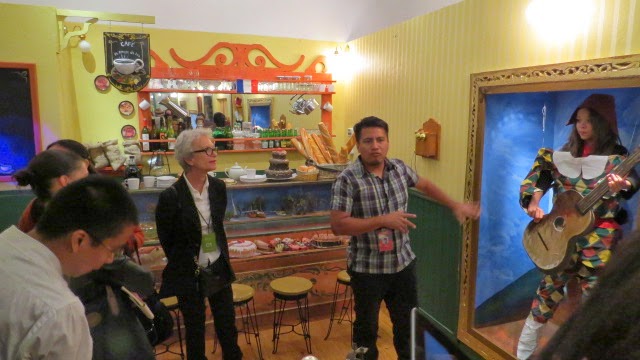 Stepping through the doorway beyond the last painting will put you in a 1900s Parisian café. Choose a table and sit down. One of the servers will bring you a menu. But instead of food on the menu there are names of artists and art supplies to choose from. The museum invites you to create whimsical scenes based on the work of the artists you’ll have just seen — and save them in photos. Hats of the time period are available on a hat rack.

Niches in the wall are large enough for two or three people to stand in and are framed as if they are paintings hung on the wall. In them you’ll find masks, dresses, and tuxedos.

The entire experience is a delight. Where else could you enjoy the whimsy of creating your own art a few steps from a staid art gallery, combined with Mexicans’ ability to laugh at death, all set amid lovely gardens?

The only thing that brought a bigger smile to my face during my visit to the museum last Thursday was hearing Marie-Paule Vial, director of the Musée de l’Orangerie, talk about the Mexican collection on display in her museum.

She said: “All over Paris people are talking about Diego, talking about Frida. The surprise for the French public isn’t in discovering Frida. She’s already well known through film and exhibits in Europe. But through the exhibit at Musée de l’Orangerie we’ve been able to show Diego’s work on canvas.”

Hard for many in Mexico to accept. For years I’ve been hearing that “Frida is known because of her husband.” Fitting of the French though — didn’t they refer to JFK as “Jackie’s husband?”
Posted by Charlie Goff at 4:28 AM