I was transported last Thursday into the lives of Tibetan exiles living in Dharamsala India. I met award-winning journalist and photographer Peter Aronson near UNAM at Plaza Loreto. This former paper factory is now an upscale shopping mall and home to the Soumaya Museum’s still functioning original location. Peter led me through his exhibit — Dharamsala: Three Generations of Tibetan Exiles, on display through Oct. 20.

The exhibit holds 30 large photos, Peter’s culled choices from five years of living in Dharamsala, India, home to the exiled Tibetan Dalai Lama and his followers. There’s also a 12-foot panoramic collage of 93 photos taken walking down a main street one day in Dharmasala. 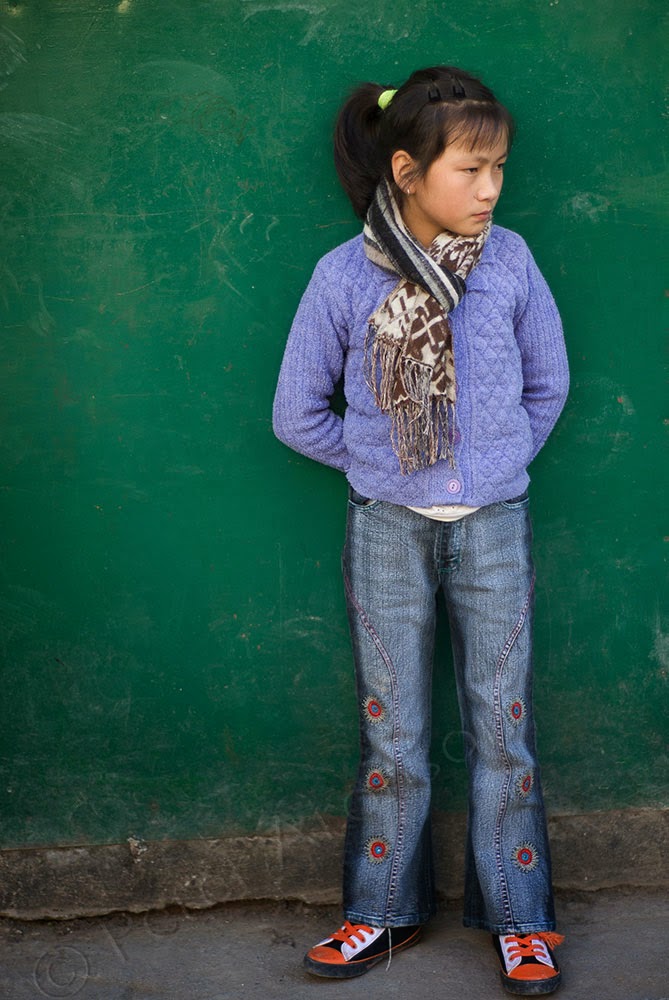 Looking at the collage I felt like I was walking the street myself. I peered into each shop door and even saw a man with a ten-foot-long snake draped over his shoulders and holding it by its neck — that is if a snake has a neck. In other photographs Peter took me into people’s living rooms, shops, political demonstrations, into a kindergarten, even to a wedding.

Peter’s photographs are of such clarity that I could read the titles of the books on the shelves and tell the brand of monks’ footwear — they tend to favor Nike and Tevas.

Peter shared anecdotes about the people in his photos and explained their body language. The friendly face of a monk who’d spent 20 years in a Chinese prison before Indian exile was Peter’s philosophy teacher. Upon arrival in Dharamsala the Dalai Lama asked this monk if he was ever afraid while imprisoned. “I was often afraid,” he replied. “I was afraid I’d lose compassion for my tormenters.”

In a photo of a stern faced former Tibetan soldier and his wife I spotted seven silver bowls on a shelf next to a small light — “they are the traditional gifts you give to a visitor: water to drink, water to wash their feet, flowers, incense, perfume, food, music and illumination.”

Moving through the exhibit we saw younger Tibetans born in India. Peter said: “They struggle with an identity crisis. Who am I? Am I Tibetan, Indian, Asian, Western? Many reject the style of older Tibetans. The young want to move on to something else but there is no consensus about what that will be.”

A photograph of a young travel agent talking on a cellphone seemed the perfect embodiment of this new idea. “Look at his belt buckle. It’s a spinning dollar sign.” The caption beside the photo reads “The Dalai Lama jokes that the mantra of compassion made up of syllables in Sanskrit is changing from the traditional ‘Om mani peme hum’ to its English version ‘Om money money.’” 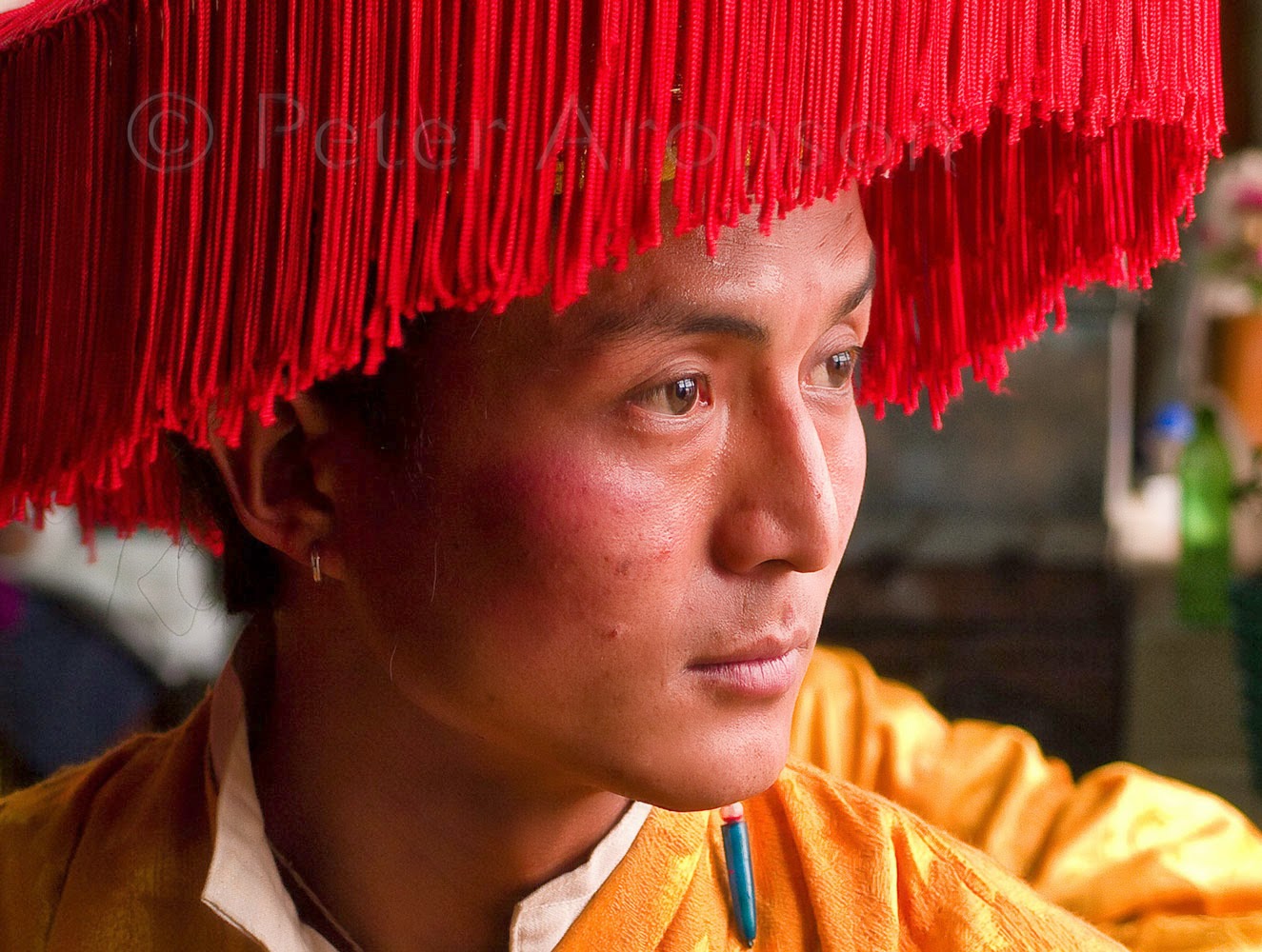 Peter said that “a lot of photographers go to Dharamsala and take pictures of Tibetans. They’re usually looking for the exotic, dressed in traditional clothing spinning a prayer wheel. Few show the Tibetans the way I see them — how they are becoming Westernized, or Indianized, how their culture is changing. Outsiders may be surprised to see that Tibetans are not all saintly. They’re not all like the Dalai Lama. I’m not trying to fit them into any particular box of expectations. I’m just saying ‘this is what I see.”

Outsiders are in for lots of surprises. In his Sunday talk in Mexico City, I was surprised by the Dalai Lama himself. The importance he gives to education and modern science was refreshing to hear from the leader of a worldwide religion. His recognition that global warming is occurring and measures need to be taken to counteract it puts him on the cutting edge of human survival, in my view.

Imagine my trepidation showing up at a photography exhibit with my camera hanging over my shoulder and tripod in hand, but I wanted to get a photo of Peter surrounded by his exhibit. As we came to the end of the exhibit I asked Peter if anyone objected to him taking his or her photograph. “People in India love to have their photo taken.” Peter seemed to like having his picture taken too — in his style. “You didn’t ask me for any photo tips but my first photo tip is always get closer.” Pointing to a close-up photo, “With this guy I was like this;” he walked up to one of his portraits, imaginary camera in hand, stopping only a foot from the person’s face. “This guy,” referring to the travel agent, “I was in his face too. I get close to people. I think it’s important if you’re going to capture something of the person to engage with them. I don’t walk by, sneak by, grab a photo. I say ‘Hey! How’ve you been? I talk with them and soon have the camera right in their face.”

It worked for me; I felt fully engaged in the lives of the photo subjects.

Dharamsala: Three Generations of Tibetan Exiles will be open tomorrow through Sunday (closed on Tuesday) in the Soumaya Museum in Plaza Loreto. It’s an easy walk from Dr. Gálvez metrobús station. There’s plenty of parking if you’re driving.
Posted by Charlie Goff at 4:32 AM