Cuernavaca resident Dorothy Wick called me in 2013 as she was preparing for a trip to Cuba. Dorothy knows that I have an extensive library at the Cemanahuac Educational Community. She was wondering if I had Tad Szulc’s “Fidel: A Critical Portrait,” published in 1986. I told her I did.

When Dorothy opened to the title page the label revealed it was she who had donated the book to the library. Another notation revealed it had originally belonged to Cedric Belfrage, co-founder of the radical “The National Guardian” in New York City. 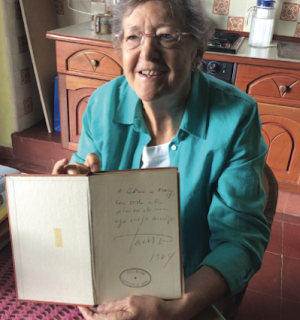 The fact this book on Cuba had been purchased by a British-born journalist and then passed through the hands of a New York University librarian to me is not that surprising. Mexico has been the chosen home of many international intellectuals.

Cedric Belfrage was born in London in 1904. As a young Cambridge student of privileged background, Belfrage was attracted to liberal thinking. He traveled to Hollywood, California; soon finding success as a film critic and writer. He joined the Communist Party in the United States for a few months prior to World War II. During WWII he served Great Britain as a liaison with then ally, the USSR. That service, and his brief membership in the Communist Party would come back to bite him hard.

With the inception of the Cold War and its ensuing paranoia, the United States began to look for Communism in all liberal institutions, particularly in Hollywood and among the U.S. intelligentsia. The House of Representatives’ Un-American Activities Committee (HUAC) grew increasingly powerful.

The only way to satisfy the committee was to name names of “fellow-Communists.” Many innocent men and women were accused; many imprisoned. Even if not convicted, an accusation was often sufficed to be blacklisted the end of any possibility of employment in Hollywood.

There were few who stood up to the committee. Cedric Belfrage did and his reward was deportation from the United States to Great Britain. He almost immediately chose to live in Mexico.

To avoid testifying before the HUAC a number of U.S. citizens also relocated to the welcoming Mexico; a colony of U.S. intellectuals formed in both Cuernavaca and Mexico City.

In 1950 10 of Hollywood’s premier writers were called before the HUAC. On U.S. Constitutional grounds the Hollywood Ten refused to answer any questions regarding their political beliefs and affiliations. They were all imprisoned. In 1954, at the height of the “Red Scare,” the United States banned the Communist Party and made membership illegal. The ranks of U.S. citizens in Mexico and abroad swelled.

Those who self-exiled to Mexico continued to produce movies, books, and screenplays using pseudonyms. Three of the Hollywood Ten were friends of Cedric Belfrage and lived in Mexico for at least a decade. Dalton Trumbo, Albert Maltz and Herbert Lieberman continued to work, even winning major awards under other names. They were regular visitors at the Cedric and his wife Mary’s home and gardens in Cuernavaca.

For 30 years, the Belfrage home high on a ridge overlooking downtown Cuernavaca with a privileged view of snowcapped Popocatépetl functioned as a B&B. It was only thinly disguised in Carlos Fuentes’ novel “The Years with Laura Diaz,” as an “asylum for political convalescents.” Fuentes describes Sunday afternoons and Mary Belfrage’s weekly rite of “preparing a bottomless bowl of spaghetti for all the dispossessed, all comers.”

When he died, Cedric Belfrage left his archives and personal papers to New York University. In 1991, one year after his death, Dorothy Wick first traveled to Cuernavaca to assess what he had left.

Dorothy was well prepared for the task. She describes spending much of her career as head librarian of NYU’s Tamiment Library, reorganizing the Rand School of Social Science collection of papers and books and bringing them into NYU Libraries Special Collections where they became available for scholarly research.Dorothy also trained archivists in the processing of labor union and personal papers collections.

Cedric Belfrage’s archive fit well within the Tamiment Library collection. In collaboration with Mary Belfrage, Dorothy assembled the Belfrage archive and shipped it to NYU. However the Belfrage’s collection of books was not part of the donation to NYU. Mary had already dispersed a great number of the books before Dorothy arrived in Mexico. Some were sold, others were given to friends. Only a few were still on the shelves.

A year after Mary’s death, Dorothy purchased the Belfrage’s home and contents and has lived there ever since, surrounded by the ghosts of the brave men and women who stood up to the HUAC and made Mexico their new home.

Last month colleague Carol Hopkins and I visited Dorothy in her home where with an array of books on the kitchen table she treated us to stories in their setting.


Besides being a thorough librarian and archivist, Dorothy is very kind and generous in giving more credit than due. Referring to her trip to Cuba, Dorothy told me, “Incidentally, I got the trip award for being the best-read traveler. Thanks to your library!”
Posted by Charlie Goff at 12:18 PM