The power of the flag

On most afternoons at 5:45 p.m., an army band leads a parade out of the National Palace onto the Zócalo in Mexico City to retire the Mexican flag for the night. I try to make the flag lowering ceremony the last event of the day on my field-study trips to that part of town.

The size of the flag flown in the Zócalo is such that it takes sixteen soldiers to roll it up while all the time keeping it from touching the ground. On windy days I’ve seen soldiers lifted off their feet trying to wrestle the flag. It can seem humorous to watch soldiers trying to maintain the composure required of a military operation while trying to control a huge flag flapping in the wind. I caution members of my groups to keep a serious face throughout the event since Mexicans near them might think they were laughing at the ceremony.

Not only do I enjoy the well-rehearsed nature of the military exercise, it’s also a way for foreigners to experience, first-hand, the deep respect Mexicans have for their flag. In many countries, including northern North American and western European nations, national flags are featured on beach blankets, drink coasters and items of clothing including underwear. You won’t see that in Mexico.

I’ve been to many political demonstrations in Mexico and I’ve never once seen the Mexican flag defaced or burned. Groups from the entire political spectrum seem to agree on their respect for the flag. From left to right, political groups often begin their meetings or events by honoring the flag.

During its first year of operations in Mexico, a misguided attempt by McDonald’s to honor Mexico’s flag went awry. The fast-food chain attempted to join in September’s Independence celebrations by making the flag the design of its placemats. Imagine patrons spilling catsup and mustard on the placemats and then wadding them up and throwing them in the trash. This lasted for approximately four hours before all McDonald’s restaurants were closed down. They remained closed for three days and then fined.

Flags are very potent symbols. After the horrific recent massacre in Charleston, South Carolina, African American Bree Newsome climbed the flagpole outside the South Carolina statehouse to remove the Confederate battle flag. She did this knowing she risked imprisonment.

In Washington D.C. last week, Cuba re-opened its embassy with a flag ceremony. Cuba’s Foreign Minister Bruno Rodríguez raised the same flag that flew over that building the day President John F. Kennedy broke diplomatic relations. Rodríguez was 3 years old then. Raising that flag even required a new flagpole be installed no flag had flown over the building during the 54 years relations were severed.

On the same day thousands waited on the streets of Havana for the U.S. flag to appear on the U.S. Embassy. Their vigil was disappointed. The U.S. State Department announced it is waiting until Secretary of State John Kerry is present next month to raise the U.S. flag.

I’m celebrating the reestablishment of diplomatic relations in a special way. My father and mother were Presbyterian missionaries deeply involved in Latin American justice issues. In 1972 they prepared a white paper for the United Presbyterian Church USA’s Task Force on U.S.-Cuba Relations. In the 1990s they supported Reverend Lucius Walker and Pastors for Peace, a social-justice organization that repeatedly challenged the U.S. embargo against Cuba in an effort to provide that country essential humanitarian supplies, sometimes through Mexico, other times through Canada.

In 1992, I joined Pastors for Peace’s caravan to move donated medical equipment, humanitarian supplies, and Bibles from Laredo, Texas to Tampico, Mexico to be transported to Cuba. It was an open challenge of U.S. Congressman Robert Torricelli’s so-called Cuban Democracy Act that prohibited travel to Cuba by U.S. citizens. It also prohibited trade with Cuba even by foreign-based subsidiaries of U.S. companies.

Four weeks after the Torricelli Bill went into effect, U.S. customs officers wrestled clergymen in clerical collars to the ground on the Texas side of the border merely for attempting to carry Bibles across. By contrast, in Mexico, the Federal Chamber of Deputies voted unanimously to instruct immigration officials to expedite our entry into Mexico, and for Federal Highway Police to offer our caravan assistance to reach the port of Tampico where a Cuban freighter awaited our supplies.

When word arrived at our camp that the U.S. Customs Service had relented and would allow us to continue our journey, without requesting or accepting export permits, I was fortunate to lead the convoy of 44 vehicles into Mexico. The celebratory honking horns of our motley caravan sounded like a marching band to me that night.


The next day I found myself featured in the New York Times perched atop the lead pickup waving a flag. That photo hangs in my office as a proud reminder of the power of a flag. 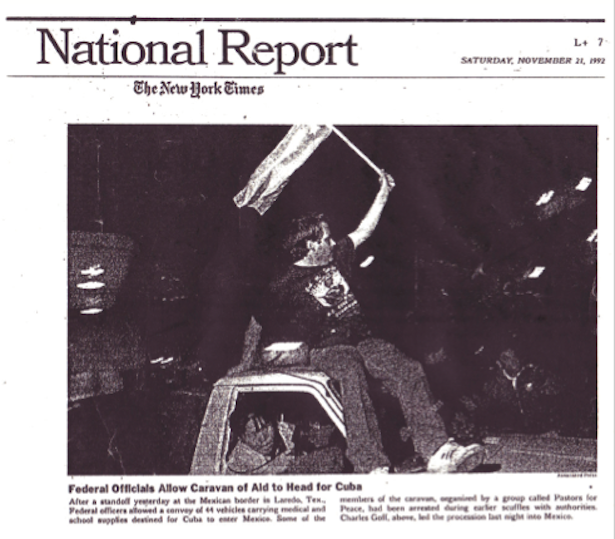