On July 14, 1957, a 16th-century Franciscan church in the heart of Cuernavaca was consecrated as the Roman Catholic Cathedral of the Diocese of Cuernavaca. Church dignitaries came from near and far to celebrate in the newly renovated sanctuary.

Bishop Sergio Méndez Arceo later recounted, “When it was all over I bought all available newspapers to see how the press had covered the consecration. Only then did I realize the coincidence of the date; it was the anniversary of the storming of the Bastille. How appropriate! The storming of the Bastille was a liberating experience for the people of France; the renovation of the interior of Cuernavaca’s cathedral is a liberating experience for the people of the Diocese of Cuernavaca. We got rid of the excess clutter and can get down to the basics of what Christian life should be about.”

Ten years later, in 1967, Don Sergio decided that old European organ music was out of cultural context. He ratcheted up the joyous nature of the Mass by inviting mariachi groups to take turns playing in the cathedral. Now commonly referred to as the Mariachi Mass, its proper name is the Panamerican Mass and it started in Cuernavaca. Four of Don Sergio’s successors continued this tradition; the current bishop cancelled the popular weekly event.

Last week I was delighted to learn from Edward Priest, a Massachusetts native with a thick Boston accent, that a few blocks away in Cuernavaca’s Guadalupe church the Mariachi Mass is still celebrated every Sunday at 12:30 p.m. He should know. Ed is a mariachi and plans his trips to Cuernavaca around Sundays. In 2009 he started playing with the mariachis in the Cathedral. 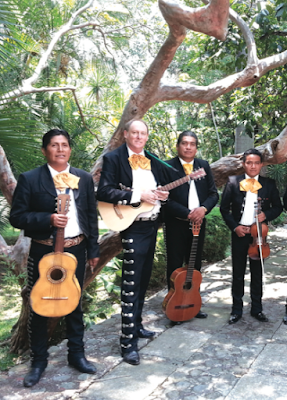 Ed is a middle school French and Spanish teacher in Falmouth, Massachusetts as well as a musician in his own right. For nearly 20 years he has been coming to Cuernavaca every other year to improve his Spanish. His musicianship earned him the friendship and acceptance of many of Cuernavaca’s mariachi musicians.

Last Friday I interviewed Ed in Cuernavaca’s downtown zocálo. Dressed in his black “charro” suit, he was with other members of the Charros de Morelos waiting to be contracted for a party or serenade.

Each time Ed returns to Mexico he brings with him a hardbound book self-published through Shutterfly.com of photos taken on his previous trip. A photo in his current book caught my eye. Ed and some of his friends are at a going-away party being serenaded by a guitarist. The caption read, “Juan gave me the music of my very good friend Joaquin.”

Juan knew Ed really appreciated Joaquín’s guitar-playing and singing skills. The gift was not a CD or recording. Instead, Juan paid Joaquín to play at Ed’s table for an hour. During that hour, Joaquín was not a guest at the table. He was serenading Ed.

This may seem like an unusual relationship to music but is subtlety present in many Mexican venues even in Mexico City’s Plaza Garibaldi, where one goes to find mariachi for a serenade (seven songs) or per-hour for a party.

Mariachis can also be hired to play a single song or several songs in the plaza itself. In that case the audience may be a couple, a family, or a group of friends sitting on a park bench. Sometimes the mariachis are playing to a car and the people inside it. I’ve even had them get on board a tour bus to play Las Mañanitas for travelers celebrating a birthday.

Invariably passersby gather to listen to the music. In most any other country those gathered around would applaud each song. Mexico’s protocol is different those that listen-in just walk away. They’re eavesdropping on someone else’s music. Had they not liked it they wouldn’t have stopped to listen. But it is not ‘their’ music to applaud.

This understanding of “owning” music existed in Mexico long before copyrights became a source of income for musicians from the Internet. In mariachi or trio performances, the owner is the listener, not the singer or even the composer. In an open plaza setting the “one who pays the piper” has temporarily become the owner of space in the most public of places.
Yet in restaurants, where roaming musicians charge patrons per song, the whole restaurant often applauds each song. In this case, the “one who pays the piper” offers the music to those in the restaurant, taking them into account much as he or she would say “buen provecho” to those at another table upon arriving or departing.


Ed Priest now has two charro suits, black and grey. In addition to the Mass he plays parties and gigs with the other mariachis. He summed up the way music has opened doors for him in Mexico, “I feel deeply honored to be included as a mariachi and now play with a Puerto Rican group when I’m home. Music is a universal language that helps bridge cultural differences.”
Posted by Charlie Goff at 12:09 PM